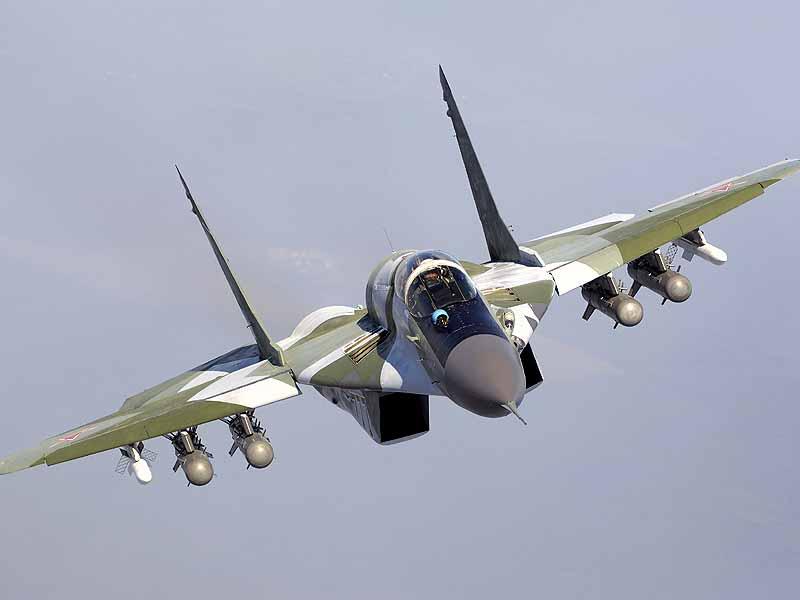 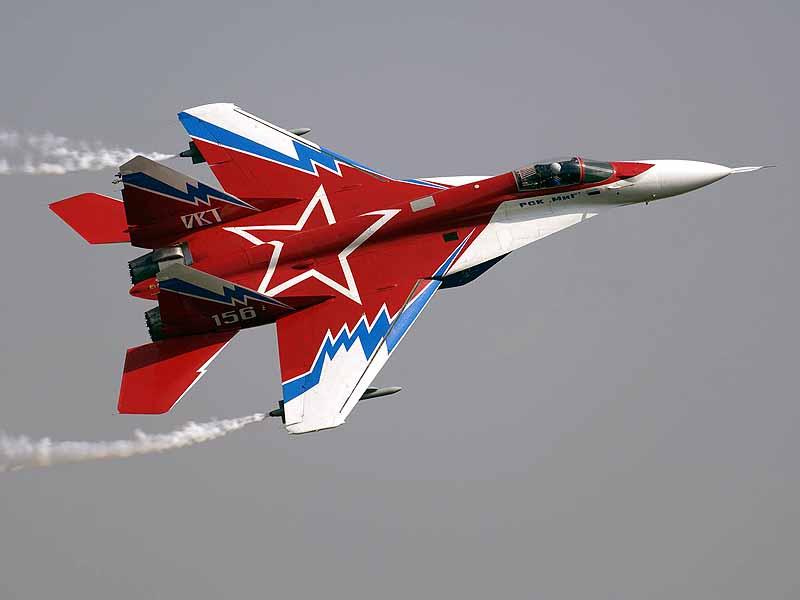 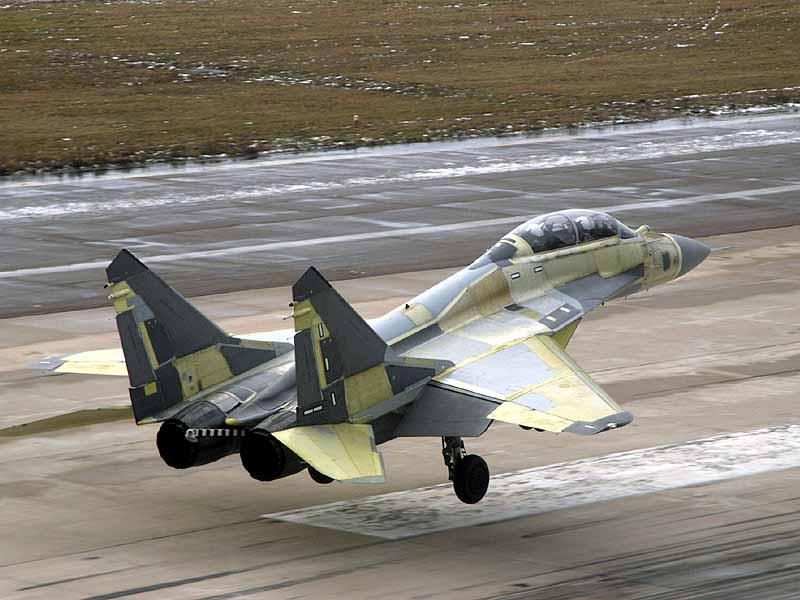 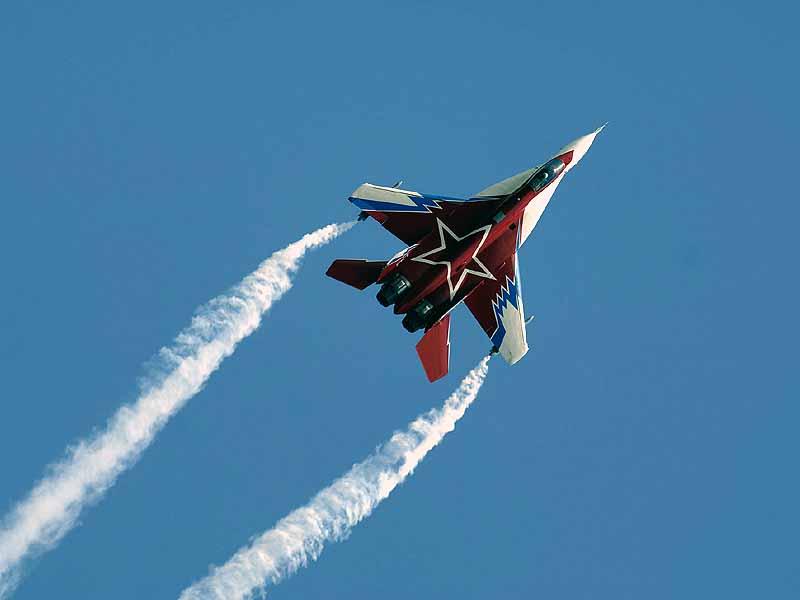 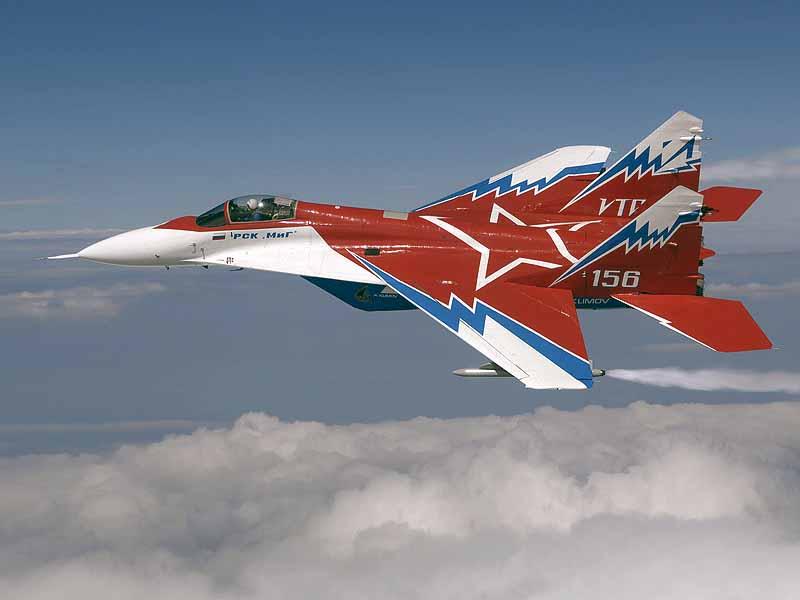 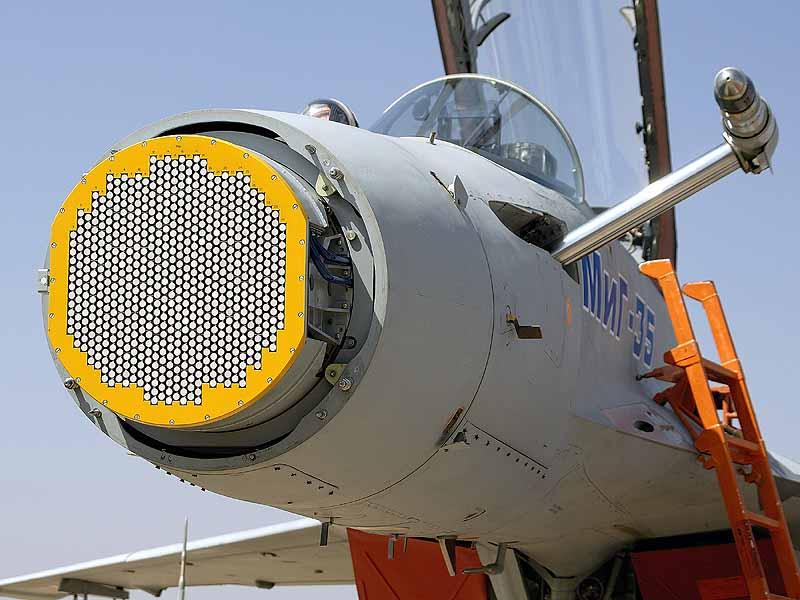 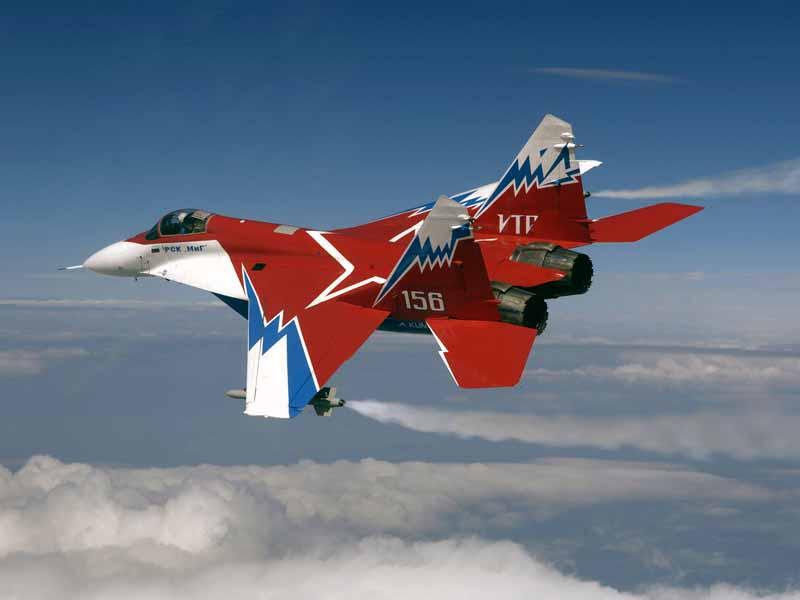 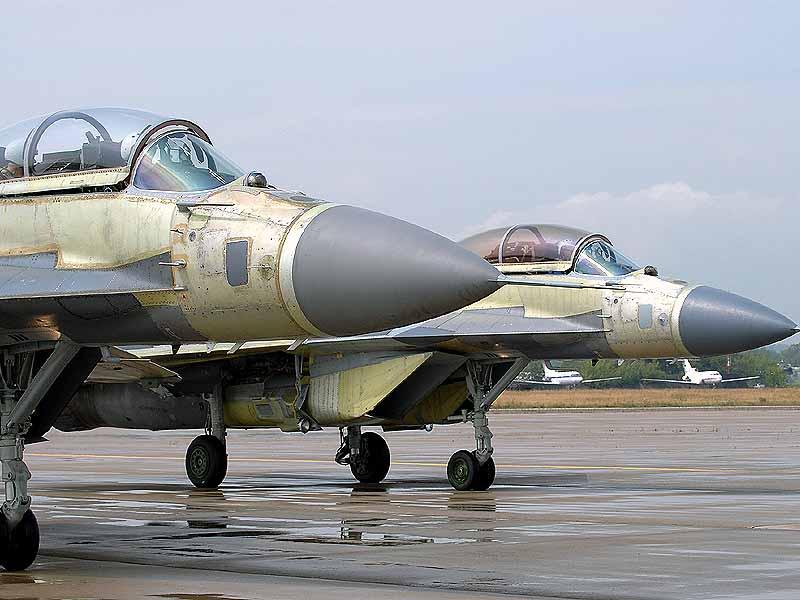 Note: at the moment these flights are not offered for tourists.

The unique MiG-29 fighter will let you get dramatic impressions and a lot of adrenaline while performing normal and advanced aerobatics manoeuvres - from standard to most advanced, depending on your physical condition. ​

There are two flight programmes available for MiG-29: 25 minutes and 45 minutes duration and they include supersonic aerobatics or a flight to the edge of space, altitude up to 23 km. ​
Maximum acceleration you can experience during the flight may reach 7-8G with the minimum of 3-4 G. It should be noted that the flight programme is quite flexible and is designed by the pilot depending on how the passenger feels. You should not get scared thinking that it is only young and physically strong men who can stand such a flight.

NOTE: we have launched a dedicated website for MiG flights in Russia. Please see below a sample itinerary or visit: www.skyandspacetravel.com for more details and price options.

GET 25% OFF PER PERSON. FREE CANCELLATION UP TO 3 WEEKS BEFORE DEPARTURE

Tour Dates & Prices Book Now
Prices and dates upon request, please contact us for more information.
Please note all prices are per person based on a minimum of two people travelling together. Read more about prices for solo travellers.

Moscow
Moscow
Moscow City Centre Walking Tour
Moscow City Centre Walking Tour During the tour we will walk around major cultural and historical points in Moscow. We will visit Lubyanka Square – the world-famous KGB centre of the Soviet epoch, and the Teatralnaya Square next to Bolshoi Theatre. Then we will continue our walk through the small central streets and lanes where every building has its own unique and interesting story. Most of them currently represent Russian theatres, hotels, museums or state institutions. We will also visit Tverskaya Street – the main and the busiest street in Moscow – with lots of shops, restaurants and unique combination of old, Stalin and modern architecture. We will then take a stroll along the pedestrian zone near the Red Square.


Add to CB-40 tour Send request
Moscow City Tour by Car
Moscow City Tour by Car A city as great as the Russian capital requires your undivided attention. Our guided city tour by car affords the opportunity for you to sightsee without concerning yourself with getting around, as well as enabling you to cover sufficient ground to get a sense of place. Here in Moscow, more than anywhere else in Russia, you’ll sense the presence of the Russian Renaissance; the city, like the country as a whole, has altered immensely over the past two decades.

Add to CB-40 tour Send request
Moscow City and Novodevichy Convent Tour by Car
Moscow City and Novodevichy Convent Tour by Car Start your discovery of Moscow with a guided city tour by car. Enjoy a panoramic view of the city from the Sparrow Hills observation platform, visit Poklonnaya Hills a monument in honour of a Russian victory in the Great War (World War II), see the famous Red Square and the Bolshoi (Big) theatre or explore modern Moscow’s busy streets and discover the rich history of this magnificent city. Visit one of the oldest convents in Russia, the Novodevichy Convent.

Add to CB-40 tour Send request
Red Square, St. Basil`s & Lenin Mausoleum Guided Tour
Red Square, St. Basil`s & Lenin Mausoleum Guided Tour Guided tour to the Red Square arguably one of the most famous squares in the world. It's got its name from the Russian word for "red", which many centuries ago meant "beautiful". Each building here is a legend: you will see brightly-domed St. Basil's cathedral, the world - renowned Lenin Mausoleum, expansive facade of the GUM department store, Kazan Cathedral and Kremlin towers. Today, Red Square is a popular tourist attraction and it is often used for rock and pop concerts including high-profile participants like Paul McCartney, Pink Floyd and others.

Add to CB-40 tour Send request
Kremlin Grounds & the Armoury Guided Tour
Kremlin Grounds & the Armoury Guided Tour You will discover the interior of the Kremlin - the former residence of the Tsars and now the residence of the Russian president. You will also visit the Kremlin’s beautiful orthodox cathedrals. The Cathedral Square still retains the aura of early Tsarist Russia, where the spirits of Ivan the Terrible, Boris Godunov, and the early Romanovs loom large. We will also visit the Armoury to see a unique collection of ancient state regalia: the ceremonial vestments and coronation dress of the Tsars, gold and silverware by Russian craftsmen, and ceremonial weapons and arms (optional).

Add to CB-40 tour Send request
Diamond Fund Guided Tour
Diamond Fund Guided Tour The Diamond Fund is located in the Kremlin Armoury containing the most valuable gems of Russia - a collection of masterpieces of jewellery of the 18th-20th centuries, rare precious stones, gold and platinum nuggets of great artistic, historic and scientific importance. It is one of the few treasuries in the world that house unique crown jewels. The exhibition features such treasures as diamond encrusted Coronation Crown of Catherine the Great, the world-famous 190-carat Orlov Diamond among other stunning examples.

Add to CB-40 tour Send request
Moscow Underground Guided Tour
Moscow Underground Guided Tour Explore one of the masterpieces of the Soviet era created in the Socialist Realism style. Moscow Metro with its stations decorated with marble, mosaics, stained glass panels and bronze sculptures looks like a vast art museum. It was one of the proudest achievements of the Soviet era and it’s still beating many other European underground system with its extremely reliable services. During our guided tour we will explore the most sensational underground stations where the guide will show architectural masterpieces and also explain the history of metro construction.

Add to CB-40 tour Send request
Tretiakov Gallery Guided Tour
Tretiakov Gallery Guided Tour A guided tour of the Tretiakov Gallery, the biggest collection of Russian fine art in the world. The core of the museum's collection was assembled in the middle of the nineteenth century by Pavel Tretiakov, a wealthy Moscow merchant whose passion for collecting included violins, birds, and milk cows as well as Russian art. The museum represents the whole history of Russian art from the ancient period until now. There are more than 130 000 unique examples of painting, sculpture and graphics, created throughout the centuries by talented Russian artists.

Add to CB-40 tour Send request
Old Arbat Street Guided Tour
Old Arbat Street Guided Tour Your guide will take you to the Old Arbat street, famous for its architectural masterpieces and souvenirs. This street became a favorite place of walk of the Muscovites. You will see many improvised shows, poets and entertainers. After the guided tour you will have some free time to browse among the shops selling merchandise and enjoy various Arbat cafes or restaurants.

Add to CB-40 tour Send request
Cathedral of Christ the Saviour Guided Tour
Cathedral of Christ the Saviour Guided Tour This temple was originally constructed on a vow given when banners and keys from conquered cities were brought to the temple. The height of the temple was 103 meters. In December 1931, the temple was blown up. Subsequently, the foundation ditch was used for the construction of a swimming pool. In 1994, the pool was closed and in January 1995 the reconstruction of the temple took place. Today the construction is completed and features both a working church and a museum, where excursions are regularly held.

Add to CB-40 tour Send request
Izmailovo Kremlin - Wooden Architecture Complex, Arts & Crafts Centre
Izmailovo Kremlin - Wooden Architecture Complex, Arts & Crafts Centre Kremlin in Izmailovo was created on the basis of the world famous “Vernisage in Izmailovo” souvenir market. Here you will have a unique opportunity to broaden your perception of Russian national traditions and artistic crafts and see unique examples of wooden architecture.  You can visit Museum of Bells, Russian Toys, Russian Costume and Way of Life, Museum of Russian Fairytales and Vodka History Museum (entrance fees are not included). You can also take part in various master-classes on Russian dolls painting, pottery, toy making, cooking and much more.

Add to CB-40 tour Send request
Trip to Cosmonaut Training Centre - Star City
Trip to Cosmonaut Training Centre - Star City Star City is situated to the North-West of Moscow in a beautiful pine and birch forest. See the hall where real space vehicles are used to train astronauts, the hydro laboratory, in which future astronauts learn to live and work in conditions of weightlessness, and the largest centrifuge in the world. You will see unique equipment where cosmonauts train for flight, including the MIR simulator. All the crews on the Vostok and Voskhod missions and the various models of manned “Soyuz” spacecraft, as well as those who worked on the MIR orbiting station, were trained here.