Mongolian People and Their Lifestyle 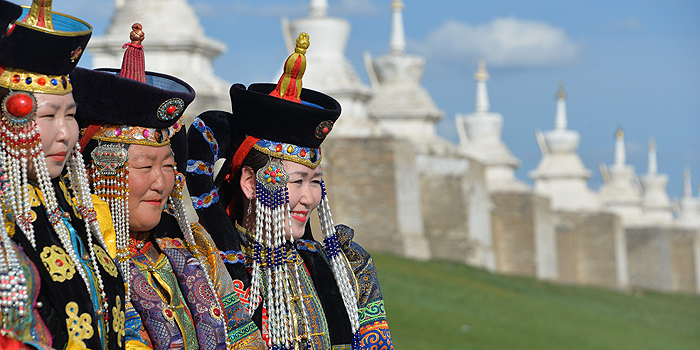 Mongolian culture has been heavily influenced by the Mongol nomadic way of life. Other important influences were from Tibet and Tibetan Buddhism, from China and since the 20th century from Russia.

The very heart of Mongolian existence is the ger – their link with the past, future and spiritual world. The central pillar – the smoke hole on the top of the tent is directly directed to cosmic axis and represents highway for spirits. The universe is full of invisible spirits. Humans have to develop good relationship with them, win them over and not to offend them. Mongolians believe that that many misfortunes that befell people and their livestock are result of evil actions by the sprits. Obtaining and maintaining good health and fortune depends on the relationship with these invisible creatures. As a result Mongolians are superstitious and have sophisticated custom system which is still practise today and often perplex Western travellers.

When passing ovoos (a cairn, the abode of a spirit) on a journey, they are often circumambulated three times, and some sweets or the like are sacrificed, in order to have a further safe trip. Certain ovoos, especially those on high mountains, are also sacrificed to in order to obtain good weather, ward off misfortune and the like.

In the 17th century, Tibetan Buddhism, or lamaism, became the dominant religion in Mongolia. Traditional Shamanism was, except in some remote regions, suppressed and marginalized. On the other hand, a number of shamanic practices, like ovoo worshiping, were incorporated into lamaist practise.

MONGOLS AND THEIR HORSES

A Mongol saying goes “A Mongol without a horse is like bird without wings” Horses are greatly cherished in Mongolian culture, particularly among the nomads because horses are very useful to people's daily lives and livelihood. Traditional Mongol breed is small – about double the pony and relatively light. Mongolians have traditionally grouped the horses into four categories: horses used to shepard sheep, horses using to round the herd, postal horses – used for military purposes and race horses. The Mongols are particularly proud of their race horses. Unlike Westerners the Mongols don’t give names to their horses, but are able to distinguish them by the colour of their coat.

The official language of Mongolia is Khalkha Mongolian, and is spoken by majority of the population. A variety of different dialects of Oirat and Buryat are spoken across the country. In the west of the country, Kazakh and Tuvan, both Turkic languages, are also spoken.

Mongols use Cyrillic alphabet, although in the past it was written using the Mongolian script. The traditional alphabet is being slowly reintroduced through schools.

If you know Russian it will be advantage as Russian language is the most frequently spoken foreign language in Mongolia, followed by English, though English has been gradually replacing Russian as the second language