Right between Asia and Russian Siberia, on the borders of Mongolia, China, Russia and Kazakhstan you will find Russia's best-kept secret - an unknown, but wonderful and mysterious land of Altai. Translated from the Mongolian language the word Altai means “golden mountains” and indeed they are a unique natural treasure.

The nature of the region is probably the most beautiful in the whole of Siberia. Nowhere else in the world you can find a territory of such a small size combining so much diversity of beautiful and distinctive landscapes. As a result of this variety, Altai is the only region in Russia where active tours, including white-water rafting, climbing, trekking and horseback riding can be arranged for all grades.

The wild Altai rivers are very popular routes both among rafting experts and beginners. The river Katun flows through the deep and narrow canyons, comparable to the famous Grand Canyon in America. Another major Altai river - Chuya - hosts every summer an annual international watersports. 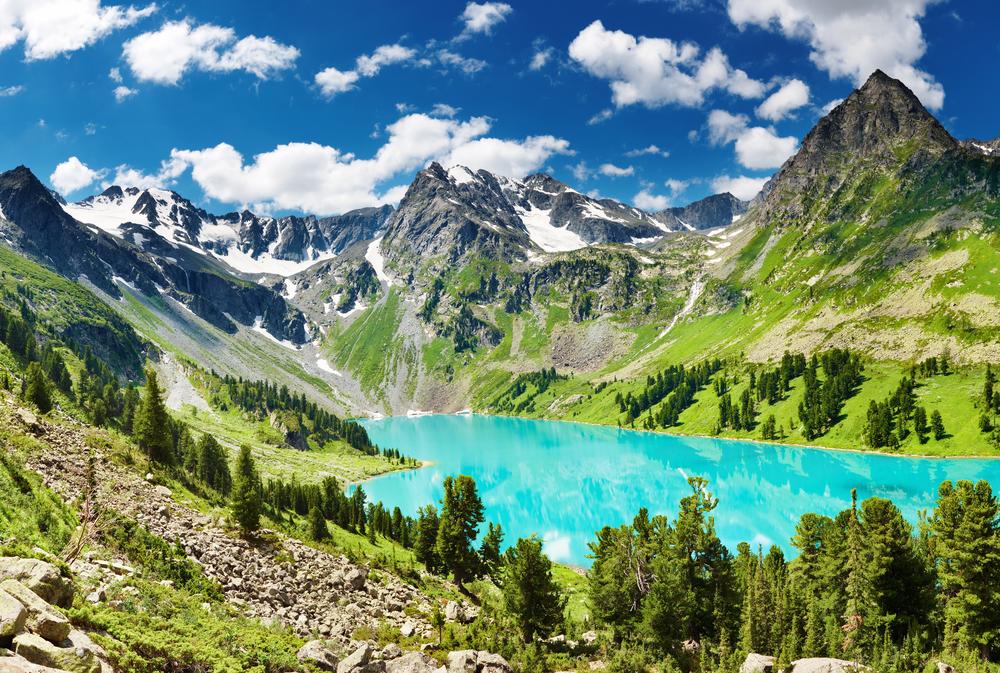 Altai - a 2000 km long mountain chain, pulled from the North-West to the South-East of the region, represents a natural border between the dry steppe zone of Mongolia and the rich forests of Siberia – the legendary "taiga". Both climate zones create spectacular and unforgettable landscapes. The taiga forest covers the land with a dense and dark cloak. The white faces of the mountains shimmer like ice castles above the green crowns and ridges. Countless lakes and springs, locked within mountain chains, astonish with their charming beauty. The diverse fauna of this fertile region is also amazing and includes 230 birds, 20 fish and over 90 types of mammals, including camels and yaks, a reminder of Altai"s proximity to Mongolia.

The genuine treasure of the mountains is "Belucha", the highest in the whole Siberia (4,506m) and is the headwater of the Katun River. Another pearl of Altai is Lake Teletskoje. Due to its crystal-clear turquoise-blue water, surrounding mountains and rich flora and fauna, it is often called “Baikal's little brother”.

The Altai Mountains are remote and vast, hundreds of miles from major cities. There has never been any developed agriculture, husbandry, wood industry or production in this region. The trees fall on the thick moss after they have lived their time. The picturesque meadows have never been mowed or used as pastures. In spring they become wide colourful carpets of flowers which last for many kilometres around the rivers and mountains. This is the reason why the area is essentially roadless and is difficult for general public transportation.

The people who live around the mountains believe themselves to descend from the followers of Genghis Khan, although their roots go down much deeper - to the culture of the famous ancient nomads. They were the herders" tribes who first appeared in Central Asia over 9,000 thousand years ago. Burial mounds, petroglyphs and stone carvings dating back thousands of years can still be found all over Altai and present real treasuries for every historian.

Have you noticed that places, where people have constantly lived since the ancient times, can gather and accumulate people"s culture? A world-known Russian philosopher and scientist, Nikolai Roerich, wrote once: “If you want to find the most beautiful place, look for the oldest.” One of such rare places – Altai - he discovered on his way to the Himalaya. Till the end of his life Rerich remembered Altai and admired the mystery, piece and powerful energy of these mountains.

The Altai is a land full of legends, the most famous one - Altai is the gate to the legendary kingdom of Shamba la. This wonderful land is currently hidden from people however it is from here the new civilisation is going to spring after the world has completely destroyed itself by its own cruelty. According to this legend, the mountain Belukha has a special gift to clear and revive the people's souls. This is also the reason why so many famous travellers as well as religions people from Tibet, China and Mongolia have yearned to visit Altai.

A mysterious and beautiful land of mountains and legends, Altai offers you a great variety of active tours as well as the opportunity to experience a traditional ancient Asian culture.