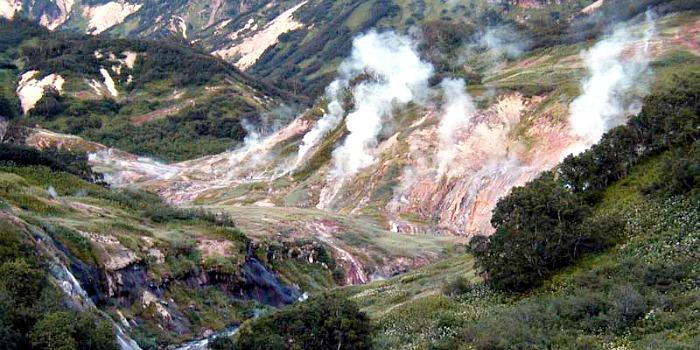 This wonderful land was discovered by Russians over three hundred years ago however even today for many people it still remains an unknown. During the Soviet times the peninsula was strictly closed to both Russians and foreigners due to security reasons and has been opened again to the general public only 15 years ago. Now the re-discovered Kamchatka is welcoming tourists from all over the world looking for an unforgettable nature experience.

Kamchatka is without exaggeration one of the most spectacular regions in the whole world. This unique open-air ecological museum occupies an area of 470,000 sq. km and has 5 national parks, 17 state animal areas, and 169 unique natural treasures.

Fire and ice, active boiling hot springs and waterfalls, blossoming meadows in the middle of snowfields and ensembles of stone sculptures created by volcanic eruptions - only after seeing all that we can understand what colors and what brilliant beauty the Earth had hidden from us after it became old and civilized. Nature took over 50 million years to do this lab work: to raise islands from the sea floor and create magnificent contrasting landscapes. It has built not simply a mountainous, but also a volcanic country to tell the history of the birth and evolution of our planet. Hot magma still rolls from the active craters, geysers and hot sulphur erupt creating a surreal landscape almost lunar in appearance. There are 414 glaciers, 160 dormant and 29 active volcanoes. Some of them you can explore during your tours.

Kamchatka’s mainland is also extraordinarily rich in water resources: about 14.000 rivers, 100.000 lakes, 274 mineral springs (160 of which are hot). Volcanoes, cyclones and thermal caverns underground created here a mixture of twenty climatic zones and a great variety of unique flora and fauna.

The local flora is distinguished by some peculiarities - gigantic grasses (up to 3-3.5 m) growing in the rich volcanic soil. The fauna includes 170 species of birds and 60 species of mammals which are larger than their counterparts on the mainland. More than half of the world’s Steller’s Sea Eagles, as well as the largest population of brown bears, are found here. Also, Kamchatka’s rivers are the spawning site for one of the world’s largest populations of salmon. A hundred thousand sea birds can be seen on the massive coastal rocks while numerous seals, dolphins and white whales swim in the crystal-clear water of the beautiful bays and gulfs.

Whatever you choose from our tours, you cannot miss the magnificent Valley of Geysers - a tiny valley hidden by Nature deep in the mountains. The valley, located in one of the deep canyons of the beautiful Kronotsky nature Reserve, was discovered only 60 years ago. There are over 20 active geysers here. Some of them gush forth every 10-12 minutes, while others may erupt once in 4-5 hours. The wreathes of steam, fountains of boiling water, incredible colours of slopes, hot water streaming along them and profuse greenery of grasses and trees create an enchanting spectacle. Everyone who visits the Valley of Geysers for the first time experiences its hypnotic power.

Most of the inhabitants live in the regional capital, Petropavlovsk, but a traditional way of life continues in the peninsula’s many scattered villages. The Itelmen, the Even, the Koryaks, the Chukchis, the Aleutians compose the indigenous inhabitants of Kamchatka. The most ancient people are the Itelmen. They live in the west cost of the peninsula and there are only about 1450 of them remaining on the peninsula. The Itelmen have preserved their language and traditional way of life: hunting, salmon fishing, collecting plants. In winter time they use their usual mode of transportation - dog sleds.

The beauty of Kamchatka captures you forever. There are probably spots in the world where time flows differently: a month lived in Kamchatka is sometimes egual to a whole life. But be prepared: Kamchatka is always changing, it is different every next moment. The more you visit it, the less you know it and the more mysterious it gets. Well, like any other Wonderland…


CLIMATE AND WEATHER OF KAMCHATKA

As there are about 20 climate zones in Kamchatka, the tourists who come to travel on the penninsula should prepare themselves for a variety of weather conditions and bring a complete selection of clothing. For example, at the end of June you might walk on the snow but also experience midsummer heat and autumn rain. In the central parts of the peninsula however the summer is milder and more stable - you will be charmed here by summer warmth, blossoming bird cherry trees and high meadows and grass.