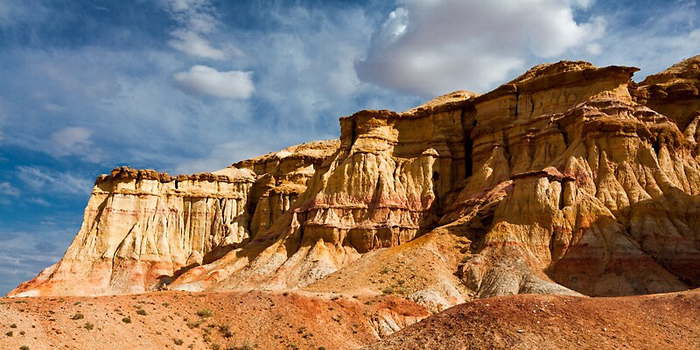 One of the most exotic and mysterious places in the world Gobi desert has always attracted adventures and explorers. The Gobi is most notable in history as part of the great Mongol Empire, and as the location of several important cities along the Silk Road.
Contrary to the popular belief, Gobi is not a desert in usual sense; it is a sandy area completely devoid of vegetation. Mongols talk about many gobis, in fact they have 33 gobis according to soil composition and colour.

The Mongolian Gobi, a vast zone of desert and semi-desert occupies almost 30% of country's territory. The Gobi is often imagined to be place of unbearable heat and lifeless sand dunes, similar to the inhospitable and uninhabitable Sahara desert. However in reality is quite the opposite. The Great Mongolian Gobi has high mountains, forests, sands, and steppe.

One of the harshest environments of earth, with extreme temperature and seasonal changes, Gobi is surprisingly full of wildlife such as gazelle, wild ass, wild camel, endangered Gobi bear and others.

Gobi Gurvansaikhan National Park. This National Park is located in southern Mongolia on the northern edge of the Gobi desert and with almost 27,000 square kilometres is the largest national park in Mongolia. The park is home to some rare species including the elusive snow leopard and the Gobi Camel

The park is named for the Gurvan Saikhan Mountains, which translates as Three Beauties. The name is derived from three subranges, the East, Middle and West Beauty.

Gobi Gurvansaikhan National Park is famous for the Hongor Els - the Singing Sands and Yolyn Am, a mountain valley that contains a large ice field through most of the year.

Hongor Els sand dunes. The Singing Sands stretch for 180km and are 15 – 20metres wide and high. The sound produced from masses of sand can be heard from far away hence the name.

Yol Valley. The Yol Valley, a protected site since 1965, is 62 kilometres north-west of Dalanzadgad and has an area of 70 square km. It is a deep and narrow gorge in the Gurvan Saikhan Mountains of southern Mongolia. The valley is named after the Lammergeier, which is called Yol in Mongolian. The name is often translated to Valley of the Vultures or Valley of the Eagles.

Very wide at the entrance, it narrows gradually into a remarkable gorge. At its narrowest part only two people can pass at the same time. Following the canyon to the very end, it will lead into a beautiful wide valley.

Bayanzag. Bayazang or the Flaming Cliffs site is a region of the Gobi Desert in the Ömnögovi Province of Mongolia, in which important fossil finds have been made, including the most famous - the first discovery of dinosaur eggs as well as complete dinosaur skeletons. It was named by American palaeontologist Roy Chapman Andrews, who visited site in the 1920s. He also discovered petrified forests, remain of mammals, in particular a skeleton of hornless rhinoceros. The rock gives off a glowing orange colour, hence the nickname.

Khovsgol National Park. The park is a gem in Mongolia’s park system. It was created in 1992 to protect lake’s ecology which has been jeopardised by miners, loggers and traders. The region is well-known for its natural beauty, and Lake Khövsgöl is one of the country's major tourist attractions.

Khövsgöl Nuur is located in the northwest of Mongolia near the border to Russia, at the foot of the eastern Sayan Mountains. It is 1,645 m above sea level, 136 km long and 262 m deep. It is the second largest lake in Mongolia as well as deepest. It holds almost 70% of Mongolia's fresh water and 1% of all the fresh water in the world. It is often called “Blue Pearl of Mongolia” because of its crystal clear water.it is one of the most spectacular places in Mongolia with mountain peaks, lush lakeside meadows, taiga and forest steppe. Yaks and horses graze in the alpine meadows, geese and stark make their home here, bear and moose roam in the mountains. Ethnic groups such as Buryat, Darkhat and Tsaatan live in the area creating cultural diversity in the region.