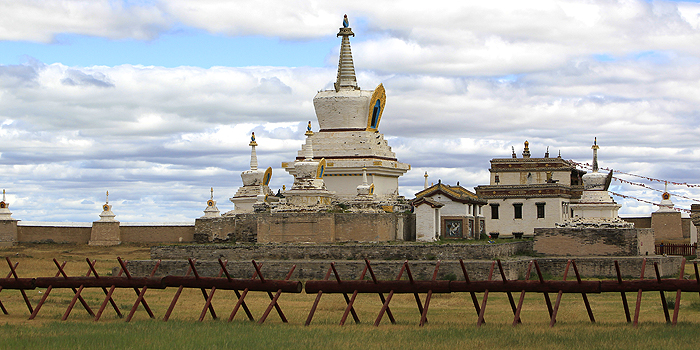 Karakorum was the capital of the Mongol Empire in the 13th century, and of the Northern Yuan in the 14-15th century. It is located on the right bank of the Orkhon River and on the north eastern slopes of the Khangai Montains.
The city existed for 140 years but only 32 of them it served as the capital. During the reing of Ogodei, son and successor of Chinggis Karakorum became diplomatic and commercial centre.

City has very nomadic appearance, the Ogodei palace was built only for official reception, and the court did not live there, but set up the camps in the surrounding areas.

Today almost nothing remains of the once great city, but its grandeur and importance can still be felt by its visitors. The nearby Erdene Zuu Monastery was first Buddhist monastery built in Mongolia. During the purges of 1937 many temples and stupas has been destroyed, but the remaining are great example of Mongolian Buddhist architecture.

Hustai Nuruu Protected area. Przewalski horse, or Takhi in Mongolian is the last wild horse in the world. The Przewalski's Horse is considered the only remaining truly wild "horse" in the world has never been successfully domesticated and remains a truly wild animal today. Its numbers are rapidly declining and great efforts are put into preserving this great animal. The Hustai Nuruu Protected area was established in 1993 and Przewalski horse has been successfully introduced in this reserve. It is located just 100km from the capital and is a great opportunity to observe wild horse, deer and gazelle.

13th century National Park. This park has been built to give feeling of the war time atmosphere of Mongolian Empire and Mongolian warriors – lifestyle, mentality, and traditions. This ancient town consist of six main sites – Defence, Craftsmen, Intelectual, Nomads, Shaman and Royal.