Ulan-Bator - the Capital of Mongolia 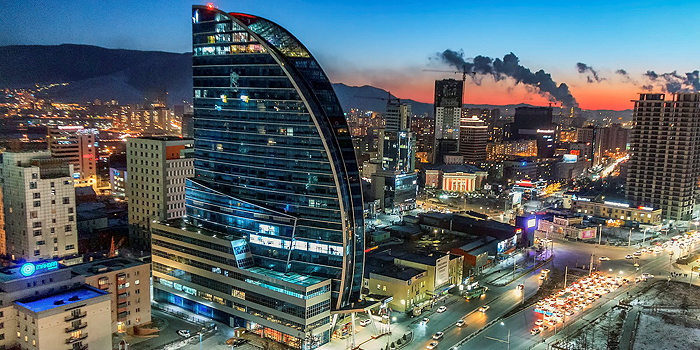 Capital of Mongolia formerly called Urga and renamed Ulan-Bator (Ulaanbaatar) after declaration of republic and abolition of monarchy in 1924 to honour Sukhbaatar – one of the main figures of complicated revolutionary times in early 20th century. Ulan-Bator means “Red Hero” and lies at an elevation of about 1,310 meters. It is one the coldest world’s capitals with winter temperatures dropping as low as -30. One third of country’s population lives here.
For a traveller dreaming to discover beautiful and open spaces, stunning landscape and traditional nomadic way of life, a first glimpse of UB might be somehow disturbing. This is city of Stalinist architecture with clumsy grim buildings. The new government harsh policies in 1937 led to the destruction of entire sections of the city. The Zuun khuree central palace-temple complex, the nobles' residences, many ger districts as well as the main markets were completely destroyed to make way for more modern buildings. Few buildings survive from before 1937.

However if you take the time to get to know the faces that are hidden behind the grey walls you will discover a hospitable and warm-hearted people.

This ever-changing city may be the biggest surprise of your Mongolian adventure.

Gandantegchinlen Monastery. The monastery was established in 1835 and is the largest and the most significant in Mongolia. It was the only place where Buddhist services continued during the communist years. Gandan monastery escaped mass destruction of 1937, was closed in 1938, but then in 1946 religious activities were allowed to proof for foreign visitors Mongolian religion freedom. At the time it was only functioning Buddhist monastery, opened to public.

New temples are being built on the grounds over the recent years.

Choijin Lama Monastery. The monastery complex was built for Choijing Lama – the State Oracle and younger brother of Eight Bogd Gegeen. This is one of the most beautiful monasteries in Mongolia. Temple Museum is devoted for religious art and the history of Buddism in Mongolia and the historical and cultural and cultural heritage of the previous century. Monastery was active until 1938, then it has turned into museum. Choijin Lama Monastery consists of 5 temples and 5 arched gates. In the main temple there is the sculpture of Choijing Lama and the embalmed mummy of his teacher. In total the museum has over 5000 items out of which 12 are unique and 200 are particularly valuable.

Gorkhi-Terelj National Park. One of the Mongolia’s best national parks established in 1994 and just one hour away from the capital. Terelj is the name of the plant very abundant in the area which flowers at the end of spring.

The area is absolutely stunning and the alpine scenery magnificent - it has been chosen many times for the Mongolian films especially for its impressive strangely shaped rock formations. and Park offers great opportunities for hiking, rock climbing, swimming (in icy cold water), rafting, horse riding and, for hard-core extreme-sports fanatics, skiing in the depths of winter.