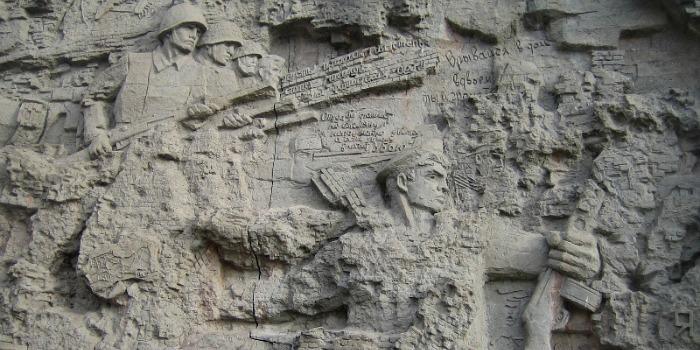 Mamaev Hill was originally a Tatar burial barrow 102 metres high, but during the Battle of Stalingrad this height was a strategic point from where the city could be easily attacked. After the World War II Mamayev Hill was transformed into a colossal memorial “To the Heroes of the Stalingrad Battle” which is by far the most fascinating sights in Volgograd.

The works on the complex started in 1958 and it took almost 10 years to complete this ambitious project. The complex opens with an introductory high relief sculpture Memory of Generations which sets the mood for the excursion. On the same square there is an alley of Hero Cities and it continues with the Alley of Pyramidal Poplars, symbol of eternal life. The alley enters an impressive 65 x 65 metres “Square of Those Who Fought to Death” with a dominating statue of a soldier in the middle. Continuing up on both sides the stairs you will see “The Ruined Walls” - another part of the complex depicting various scenes from the Battle of Stalingrad. A few more steps up the hill the Square of the Heroes opens with its simple geometrical lines highlighting the shape of the top of the hill crowned by the allegorical 85 metres tall statue of Motherland. There are 200 steps from the bottom of the hill to its top, after the number of days of the battle. In 2005 the Church of All Saints was opened in the memorial.
Send request All excursions
£95per person
3 hours
Go Russia on Tripadvisor Atol protected IPP Insurance
Copyright © 2005-2020 GR Travel Group Ltd., Tel.: +44 (0) 20 33 55 77 17, email: info@justgorussia.co.uk
Join our newsletter Go