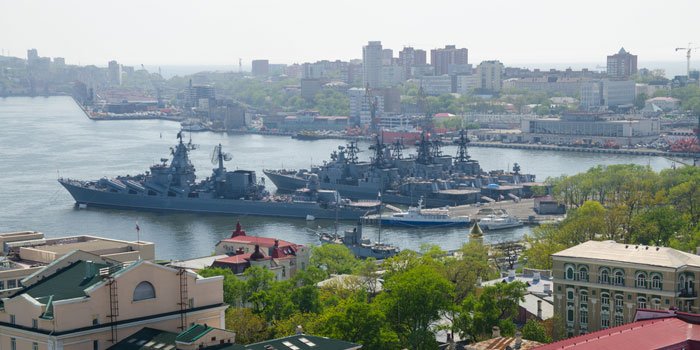 One of the most important holidays marked by the citizens of Vladivostok is Navy Day, which takes place on the third weekend of July. In the run-up to the festival ships of the Pacific Fleet start to converge on this easterly port city and sit at anchor in Amur Bay. It’s unusual to see so many warships of different kinds in one place. In the morning of Navy Day, locals don navy and white striped shirts known as “telnyashka” and head down to the waterfront.

Those who can, pin their medals to their parade uniforms and take their place amongst the crowd. After the Commander of the Pacific Fleet has inspected the crews, a re-enactment of a sea battle takes place. The airborne division buzzes overhead, while Special Forces demonstrate their skills as they emerge from the water or climb down the cliff on ropes. The Pacific Fleet orchestra provide a rousing soundtrack and a good time is had by all.