Magnificent beauty of palaces and bridges 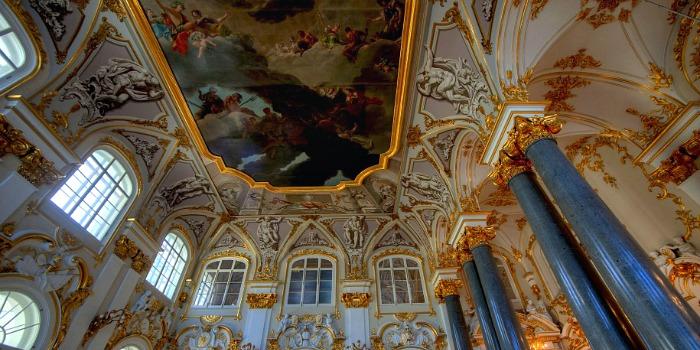 It is impossible not to fall in love with St. Petersburg, one of the most beautiful cities in the world, and after you visit it, you can understand why. The most European of all Russian towns and cities, Saint Petersburg is the second largest city in Russia. Unlike the busy capital Moscow, it is however calm and unhurried, just as a real museum-city should be.

Like Venice, St. Petersburg is spread across a lot of big and small islands. A year-round destination for tourists from all over the world, this spectacular city boasts magnificent bridges, numerous rivers and canals, and majestic palaces and cathedrals.

The city’s name is very symbolic: it was named in the honour of Saint Peter, who is the keeper of the keys to Paradise. Among the nicknames for St. Petersburg are “The Venice of the North” and “Northern Palmyra”. It is also called “the City of White Nights” which are the city’s defining features from late May to mid July. The sun hardly sets and visitors can admire the wonderful panoramas of the night-time city.

Saint Petersburg today is one of the most important cultural, scientific, and industrial cities in Russia, housing several hundred museums and exhibition halls. Great Russian and foreign artists, poets, writers and composers have admired the beauty of Saint Petersburg and commemorated it in their works.

Hermitage Museum
housed in five magnificent buildings created by famous architects of the 18th and 19th centuries. The Winter Palace, a former residence of the Russian Emperors, occupies an important place among the buildings of the whole museum complex. The Hermitage holds one of the finest art collections in the world, presenting the development of world culture and art from the Stone Age to the twentieth century.

Peter and Paul Fortress
The Peter and Paul Fortress is located in the historical part of St. Petersburg. The fortress, the first building of the new city, was founded in order to protect the Neva lands, regained during the Northern War, from possible attacks by Swedish troops. The sacred site in the fortress complex belongs to the Cathedral of Peter and Paul. The cathedral was built in 1713-1733 on the site of a wooden church founded in honor of apostles Peter and Paul. The design, by architect Tresini, features a gilded spire 122.5 meters high, which is a dominant feature of the city skyline. The fortress was used as a political prison before 1917. This doughty fortress-cum-prison has had many of its buildings converted into museums and features a splendid cathedral containing the tombs of the Romanov monarchs.

The Church of Christ’s Resurrection (The Saviour on Blood)
From the Kazansky bridge, in Griboyedov Canal the view of the Church of Christ’s Resurrection can be seen. It was built to commemorate the Tsar-martyr on the site where on March 1, 1881, I. Grinevitsky, a member of the political People’s Will society mortally wounded Emperor Alexander II. The church was built with money collected all over Russia. Architecturally, it revives the traditions of 17th century Russian church-building. In particular, the compositional techniques and shapes used are similar to those characteristic of the famous Pokrovsky Cathedral (church of St. Basil the Blessed) that stands in Red Square in Moscow. The church is notable for its complicated and picturesque outline, as well as rich and multicolored decoration.

The Alexander Nevsky Lavra
The foundation of the Alexander Nevsky Lavra is connected with important events in the history of Russia. In 1240, Russian Grand Prince and military commander Alexander Yaroslavich won a major victory in the war with Sweden on the Neva river, for which he was given the title Nevsky and canonized by the Orthodox Church as the Holy Patron of Russia. On the 30th of August 1724, the relic of Saint Prince Alexander Nevsky was carried to St Petersburg from the city of Vladimir, and placed in the monastery's St Alexander Nevsky Church (in 1790 the relic was transferred to the newly built and sanctified St Trinity Cathedral).

As St Petersburg was regarded by its founder as the administrative, political, economical and cultural capital of new Russia, the Alexander Nevsky monastery was intended to become the new religious center of the country. Laid out in the building of the Church of the Annunciation, the 18th century Necropolis of prominent figures of Russian art, today the Alexander Nevsky Lavra can be regarded as a religious center of St. Petersburg and a veritable Russian pantheon.

St. Isaac’s Cathedral
is a remarkable monument of Russian architecture. This grand structure filled up the space of the Central Square, and created a new square as well. Alongside the Peter and Paul Cathedral and the Admiralty, it became an important architectural landmark in the city skyline. The golden dome of St. Isaac’s can be seen from any part of the city, and, in clear weather, even from the suburbs.

The Main Admiralty
building is an outstanding sample of Russian and world architecture and a major achievement of early classical art. The Admiralty is the architectural and compositional center of St. Petersburg. Three main thoroughfares of the city converge here – Nevsky Prospekt, Voznesensky Prospekt and Gorokhovaya Street.

The Peterhof (Petrodvorets)
is a world-famous palace, fountain and park complex, and an outstanding landmark of Russian artistic culture of the 18-19th centuries. Founded in the very beginning of the eighteenth century by Emperor Peter the Great not far from his new northern capital St. Petersburg, Peterhof was intended to become the most splendid official royal summer residence.

The credit for its creation should go to a great number of eminent architects, artists and anonymous folk craftsmen. Its wonderful parks, 176 fountains of various forms and styles, four cascades, majestic palaces, numerous gilded statues of ancient gods and heroes, and remarkable collections of sculpture, paintings and minor works of art make Peterhof a veritable gem of art itself, often called “Capital of Fountains”, unique in the world.

Petrodvorets was practically razed to the ground during World War II, and what you see today is a faithful reconstruction that stands as a symbol of the nation's postwar recovery.

Pushkin (Tsarskoe selo)
Originally, these lands belonged to Peter’s wife Catherine I. A modest palace was put up for her at the beginning of the 18th century (named Catherine’s Palace after her), which was later redecorated by F.B. Rastrelli for Elizabeth I in the baroque style. Later on, it was the favorite summer residence of Catherine the Great (ruled 1762 – 1796), redecorated for her by the Scottish architect Charles Cameron in the classical style. Still, the palace retained its baroque exterior and it is one of the most beautiful palaces in the world! You won’t be able to find palaces of this kind anywhere outside Russia. Inside the palace, you will find both elaborate baroque and elegant classical interiors.