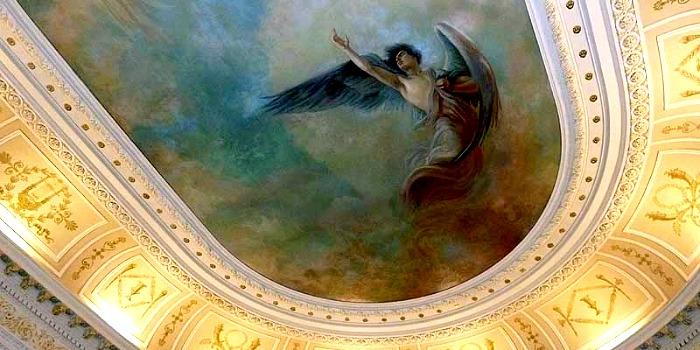 Serednikovo manor located in the suburbs of Moscow to its North is a park manor ensemble of the late XVIII - early XIX century representing high classicism architecture, the Golden Age of Russian estate. Serednikovo is one of the most famous Mikhail Lermontov’s places in Russia where he spent his summer holidays for four years in 1829-1832.

The manor will immerse you in a cozy and leisurely world, surrounded by attractive quiet park and the magical beauty of the scenery. Ancient trees, tiiny roads, soothing expanse of the slumbering pond, and brick bridges still keep alive the image of Mikhail Yurevich Lermontov. Here he dreamt, read and translated books in the library, wrote his early poems.

The main white house with a belvedere is beautiful. Elegant columned gallery links it to a single ensemble with four two-story wings, also topped with belvedere. The broad white stone staircase bordered with trunks of old larch trees, like the natural colonnade, leads from the main house to the pond.

Serednikovo history
For nearly 150 years these lands were owned by the princes Yegupov-Cherkasskie. In late 18th century the house belonged to senator Vsevolod Alekseevich Vsevolozhsky. It was him who created the manor ensemble which is known today. He set up a more profitable enterprise here building a stud farm, stables, gardens, greenhouses and conservatories, workshops, cabinet makers, and a tin factory.

In 1825 Serednikovo was purchased by General Dmitry A. Stolypin, the brother of Lermontov’s grandmother Elizaveta Alekseevna Arsenieva, and since then the manor becomes Stolypin's family nest.

In 1829-1832 young poet Mikhail Lermontov spends his summer holidays in Serednikovo. This period is probably one of the most important time in the history of the manor. During these years there were many young guests in Serednikovo where funny and carefree, all a little bit in love with each other, they always arranged long walks, boat rides, rode horses, read poems, and sang. There was a large libriray in the house where Lermontov read a lot. Late at night he loved to wander along the shore of a pond in the park, go to the village cemetery, or sit by the window of his room and write his poems. The manor hostess – Ekaterina Arkadievna Stolipina - perfectly played the piano also developing musical talent of the poet.

“Lermonotov Heritage Association” was founded in 1991 and under their initiative National Lermonotov Centre in Serednikovo was established with a view to preserve, restore and develop the estate and the adjacent territory. A new stage in the history of the manor begun: the stage of its rebirth as a museum of manor everyday life, as a architecural monument of XVIII-XIX centuries, and as a cultural landmark.

How to get to Serednikovo
You can get to Serednikovo by local train from Leningraskaya railway station, exit at station Firsanovka. Journey time – approximately 45 minutes. The manor is located 2.5 miles from the station. There is a regular bus service (bus 40) from the train station to Serednikovo.